I had the pleasure of spending an entire day at the Kentucky Fair & Expo Center in Louisville, KY as a judge in the DECA National Competition – High School Division.

13,000 students from around the country, having competed in their local and state level, converged on Louisville over the weekend. Entered in numerous categories related to business and marketing, these students presented business plans, marketing plans, advertising campaigns, and more.

I was a judge in the Internet Marketing category and was treated to some outstanding online marketing plans. Some were for fictitious businesses, while others were for actual businesses the students were currently involved with. Some were simple outlines that showed no understanding of online marketing…in any way. While others were quite well developed, included SWOT analysis, various online marketing techniques such as SEO, SEM and blogging, and fleshed out to the point of how they would offer customer service. 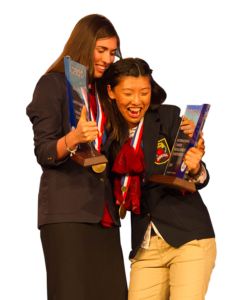 I was impressed with a few things that day. The first was the ease with which the entire event occurred. Obviously DECA had put on this event many times over the years, refining the logistics of 13,000 competing students, 1,000 judges, 4,000 student advisors and food vendors galore. The venue was perfect for this event, and the creative use of drapery as dividers for each judge was inspired.

The second was the behavior of the kids – ages 13 to 18, male and female, every nationality/ethnicity you can think of. Polite, energetic, articulate, and funny, these kids were an excellent example of what education combined with discipline can produce. Well-adjusted, independent thinking and highly social, these kids made the entire experience a grand adventure for me.

I asked about participating in next year’s event, then was disappointed to learn that it would be in Florida next year. The chances of DECA coming back to Louisville in the next few years? Slim to none. Which only makes me that much more grateful that I said “yes” to the opportunity!

My big takeaway from this experience was to open my eyes to the kids in my own area, to what they’re doing, to being available to them either as a mentor or simply as an adult that is interested in their future and their success. My hope is that every one of you who read this look into this organization and find a way to participate in your area schools’ next DECA (or something similar) event.